Friday, April 16th, 2004: Worked until 11am, then went to the dentist. After that me and Tricia went to Red Lobster for lunch with her mom. After lunch, me and Tricia printed out a few geocaches and went hunting. Our first attempt was at the Elijah P. Lovejoy monument. We searched for about 30 minutes and found nothing. A couple of guys were at the cemetary mowing the lawns and we think it may have been hidden behind where all their lawn equipment was sitting so we’ll have to go back to that one some other day. Then we went to Commons Park and wandered around a forrest looking for another one, which we found hidden under some logs. A few hours later we went to a theater in Saint Louis to watch Jersey Girl. And since the air conditioning broke down at the theater, they gave us free tickets for another show as we left! Too bad that can’t happen went I end up seeing crappy movies. Here’s a few pictures – one of my new laptop mount and one of Tricia signing the Commons Park cache logbook: 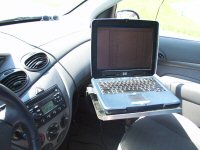 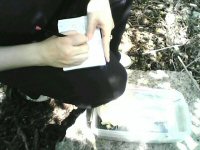