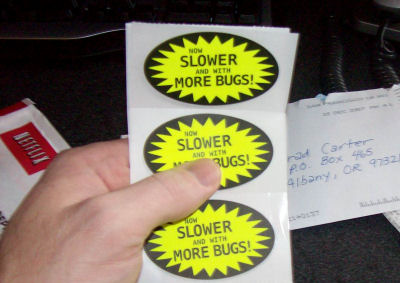 A couple weeks ago, blog after blog began featuring these stickers from evilmadscience.com that read “Now Slower and with More Bugs!” I ordered a set of 10 and they arrived in the mail a few days later. The obvious thing to do with these stickers is slap them on copies of Windows Vista. A few blogs have shown people sticking it on their own copies of Vista, but so far I haven’t seen anyone put them on software in stores. So I stopped by Target today and stuck a few on some Microsoft products. 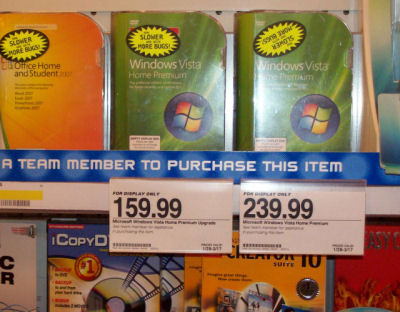 I accidentally put one on upsidedown since I was trying to be all stealthy about it. 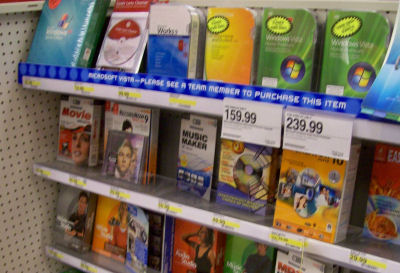 You can order these stickers from evilmadscience.com.

UPDATE @ 4:45PM: I was out again today and stickered some more products. What was it, you ask? Apple software? Intuit? Linux? Nope, just some grocery items at Albertsons… 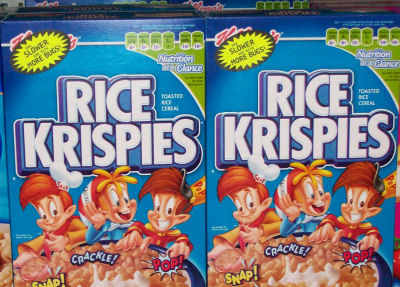 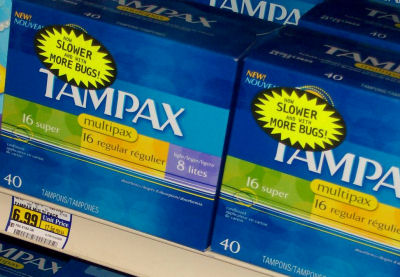 As I was snapping a picture of the Tampax (with the flash on) a girl walked by me with her cart. I’m sure she saw the flash and probably wondered why I would be taking pictures of tampons. A minute later she was blocking the isle and I was just kind of hanging out, waiting for her to move. She looked over at me and said sorry. I told her it was no problem, I wasn’t in a hurry and was just browsing. In the tampon isle.

UPDATE on Sunday: The Evil Mad Scientist site posted my pictures and some of the users there think I’m a horrible person because of it! They’re saying things like “That is illegal, and disgusting. Regardless of your loyalties, that is just uncalled for.” and “Ridiculous, childish and weak, weak humor. Vandalism is a sign of vacant creativity.” What a bunch of boring prudes! I should start putting “This product causes cancer!” stickers on merchandise and see how they react.