So you’re here to learn a little about Albany, Oregon’s scariest human being? Well you’ve come to the right place. This page is packed full of pictures, sounds and stories of Albany’s #1 citizen, Larry Davis. Next to Albany’s Gary the Retard, Larry is the most famous person living in Albany. The difference is that Larry doesn’t realize it.

Big Larry is a rather long story so prepare yourselves. All of this happened in 1996 and most of this page was written in the late 1990’s. Big Larry is the type of person that Dino will someday become. He’s about 6′ tall, has white hair that rarely combed, a big white handlebar moustache, smells really bad and of course, he’s a big-time alcoholic. He’s also a carpenter and takes pride in his power tools. A few years ago he hurt himself on the job so he claims to be “disabled” so that he gets a huge disability check in the mail at the beginning of every month and spends most of it on beer.

We met Larry in Albany, Oregon when he moved into our house. (It was a large house where many rooms were rented out.) We never liked him to begin with because he kept eating all of our food and didn’t have a job. At the beginning of each month, he got his disability check and was drunk until about the middle of the month. Then he slept in his room for a couple of days to sober up. The last part of his month was spent playing with power tools and building things in his room. Eventually, he remodeled the entire basement of the house and it looked really great. Kinda made me wonder why he was getting a disability check in the mail every month. He could be making twice as much doing this.

For the first three months, me and Larry managed to become pretty good enemies. Oh, I almost forget to mention – Larry was a hacker. Even though Larry didn’t know what a computer was, he could hack up a mean glob of phlegm. And he didn’t seem to be embarrassed about it. It was really fucking gross. I started out irritating him by imitating his hacking noises as I walked by. Then, for some reason he decided he’d buy a bunch of groceries and put them in the kitchen pantry. So each day as I was leaving for work, I’d take one or two items, stuff them in my backpack and toss them in the garbage can as I arrived to work.

There were other subtle things me and Colleen would do to him, like unplugging the extension cord while he was working with his power saw in the tool shed (I always hoped that it would screw him up when I did that and he’d cut off his arm.), flushing the toilets and running all the hot water while he showered and constantly turning off the water line that went into his bathroom.

So around the middle of summer, me and Colleen switched rooms with another tenant so we could be closer to the nursery which put us directory over Larry’s room. This had several advantages. For one, since he stayed out drinking all night and slept most of the day, we could be really loud all day, play music and stomp around alot and he couldn’t really say anything since it was the middle of the day. Another really cool thing was that his favorite pasttime, aside from drinkin’ beer, burnin’ steak and runnin’ power tools was watching lots and lots of television. Day and night, his TV was on and right outside our window was the “y” adapter for his TV cable. We had countless hours of fun listening to his cuss up a storm when his TV kept mysteriously going out.

I wanted to attach a plug onto his cable and plug it into the wall so his TV would blow up, but Colleen seemed to think that was a little extreme. When his TV went out, he listened to the oldies radio station. I tried as hard as I could with several FM transmitters to take over his radio broadcasts, but I just didn’t have enough power.

The fun really started when I noticed that Larry’s heating vent was directly below ours. We had nailed a board over ours to keep his cigarette smoke from stinking up our room when we first moved in. Larry would get pissed if our music was too loud, so I found an old 35 watt speaker and dangled it down the heating duct right above where his vent would be, then nailed the board back over our vent. I attached a 1/4″ plug to the wire and any time I wanted to hear Larry scream really loud at us, I’d just plug it in and crank up to volume to 10.

The music would blast him to hell and we could hardly even hear it. Usually I would put in a CD and make it repeat the same song over and over for the entire time I left the house, sometimes even during my 8 hour shift at work. I assumed that Larry’s favorite songs to hear all day were “I remember Larry” by Weird Al Yankovic and “Living in the Fast Lane” by Urban Dance Squad. (Being a country boy, he hates rap.) Anytime Larry got too loud for us, I’d just crank up one of those songs for about 15 minutes and when I turned it back off, he’d usually be a little quieter.

Of course, this only worked when he was sober which was only about 10-15 days out of the month. When he was drunk and I did this, he’d start pounding on the walls, screaming, “You fucking little punk-ass mother fucker! I’ll fucking kill you!” etc etc. I always expected him to go out and start smashing up my car with his power tools but he never did.

One day he had a party in his room that lasted from about 2am to 6am which kept us up pretty much most of the night. His party consisted of him and two other buddies, drinkin’ beer and swappin’ fishin’ stories and talkin’ about what a cock suckin’ mother fucker I was. We were both too tired at the time to deal with it so we got up and slept in another room. The next morning I awoke at about 8:30 and went into our room. I stood there for a few minutes until I heard Larry snoring. Cool, he’s passed out. I plugged in the speaker and cranked up some “Rest in Peace” by Extreme.

Almost immediately, Larry was banging on the wall and screaming (it sounded like as if in pain) at me to shut it the hell off. I screamed back, “No!” This didn’t set well with him so he finally figured out a way to shut my stereo off which was to open up the circuit breaker box for the whole house and shut off every switch. Not just the main switch or just our room, but every switch. Now us and 4 other tenants were without electricity. Oh well, I wasn’t phased in the least.

I suddenly noticed that the step going into our room could use a little work so I whipped out my trusty hammer and began hammering the hell out of it just to make sure it was secure. About five seconds into my hammering, I noticed that Big Lar wasn’t taking kindly to this. He was banging on his walls, then running back and forth, slamming both of his doors over and over. I suddenly had the urge to sing country songs at the top of my lungs while I hammered. So I did.

Finally, I was pretty sure that the step was secure so I looked around for other things that might need a good hammering but couldn’t find anything. I tip-toed down the stairs, then onto the basement steps to turn the circuit breakers back on. I expected Larry to pop out of his door any second with a shotgun and blow my hiney off. He didn’t, so I turned on all the breakers again and bolted back into the kitchen. I glanced out the window and noticed that Big Lar was out in the driveway, walking away, probably headed towards Fred Meyers for more beer. I considered following him there, then once inside, getting on the paging system and singing country songs but I chickened out.

For some reason, the owner of the house let Larry have the house’s phone line in his room when he moved in. A few weeks after we moved above Larry’s room, I couldn’t bear to not hear his conversations anymore because he kept calling up someone and yelling at them. So I hooked up a conversation recorder into his line and left the amp on at a low level for most of the days. Usually he would be calling his girlfriend (a 45-year-old, toothless welfare mom named Ann) and yelling at her. We never did really hear a reason for the yelling, he was just mad. 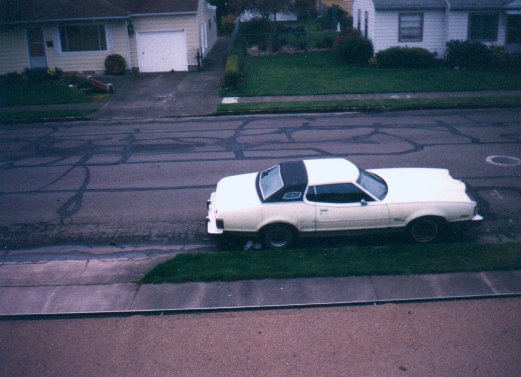 Larry’s car, taken from our window.

Larry had a big yellow banana car but it didn’t run too well and his license had been revoked for some reason, so Larry did alot of Taxicab calling because walking to the bar was just too strenuous. Usually as soon as he’d hang up with the taxicab, I’d get on my own line, call the taxicab back and using my best Larry voice, I’d say, “Yeah, this is Lar. I don’t need no fuckin’ cab after all. I’m gonna drink my beer right here so stay the fuck away from my house.”

A half-hour later, Larry would call the cab once again wanting to know what the hold-up was. The taxi guy explained (assuming he was dealing with a drunk) what happened and arranged to have a cab come over again. Then we’d interfere again with a, “You know what? Fuck this shit, I’m tired of dealing with you. I’ll just call a different cab company that knows how to get to my house.” Larry would eventually call another cab and the whole process would be repeated. Usually he’d end up asking his girlfriend to give him a ride there.

Pop’s Restuarant, his favorite bar, got so sick of us calling for Larry that they finally stopped accepting calls for him. Larry would usually just ask who it was a few times and when we kept being stupid at him, he’d hang up on us. 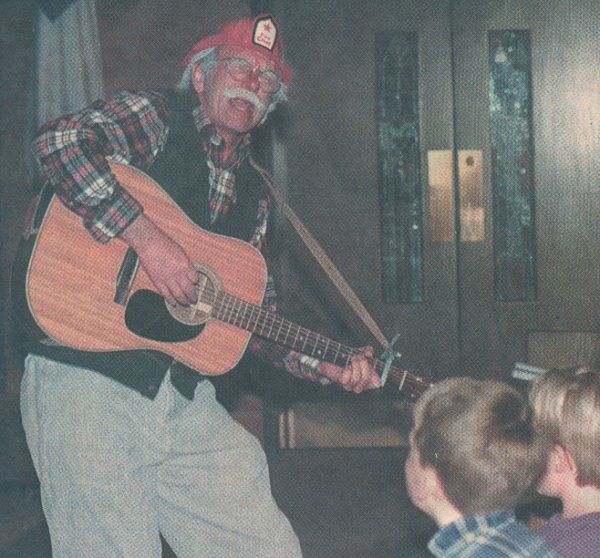 This isn’t really a picture of Big Larry because Big Larry wouldn’t be singing to children – he would be chucking beer bottles at them and yelling, “You’re all a bunch of cocksuckers!” Unfortunately we don’t have a real picture of Larry but this one looks sort of like him. 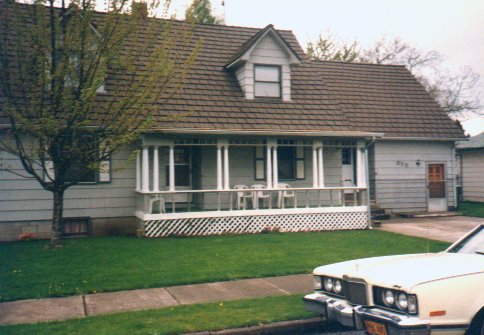 This is the house we lived in while all this was going on. The entrance to Larry’s room was the brown door on the right. Our room was originally in the middle of the house (the 2nd dormer on the roof) but we later moved into the room directly above Larry.

There’s not much of an ending to the story of Big Larry. We moved to Ohio and Larry was finally able to make phone calls again and drink his beer in peace.