December 4, 1998 rbcp Leave a comment
Friday, December 4, 1998: 2600 meeting. I only stayed at this meeting for an hour because I had other important things to do like go to the watch store to replace the dead battery in my watch. I had planned to go back down there but my 2-year-old daughter insisted that we go to McDonald’s immediately and of course she won. Kinda sucks because I missed meeting bumr by only an hour or so. Ah well…

November 6, 1998 rbcp Leave a comment
Friday, November 6, 1998: 2600 meeting. Even with Phusion dragging along a big gang of Highland, Illinois guys, today’s meeting was kind of small and nothing really all that great happened. I think we managed to tick off the manager of Fazolli’s by getting our free breadsticks over and over and over with a different person each time. Security kept their distance like they’re supposed to, probably because Vampyre stayed home. Damn, that guy is bad luck. Now that I think about it, it was probably a really great meeting but I left at 7:30 for fear of missing my bedtime so I probably just missed out on all the fun.

October 2, 1998 rbcp Leave a comment
Friday, October 2, 1998: 2600 meeting. Spuds doesn’t show up so of course bad things happen. About 45 minutes into the meeting, a young security guard walks up to our group and stands there for a few seconds. “What’s going on here?” he asks. Everyone stares in silence. This is a weird thing because our group has always been rather tame and security has never seemed to bother us before except the incident two months ago where one of the older guards came over and politely asked us to stop pointing our laser pens at the people on the escalators.

“You guys can’t be sitting here like this,” he says. “Like what,” we ask. He tells us we have to sit at the tables and can’t have our chairs pushed away from the tables or out in the isles, although I glace around the food court and notice that we’re not the only ones breaking this rule. Everyone complies and the result is about 4 little miniature 2600 meetings instead of the usual big 2600 meeting. No big deal, nobody complains and after he leaves we have a good laugh about it. Then a few minutes later, the guard comes back with reinforcements.

He brings another guard with him, points to Vampyre and says, “That’s the one.” This is Vampyre’s first time to a 2600 meeting and we’re all wondering what’s going on. The guard makes him stand up, then tells him he needs to put his coat on because the back of his t-shirt has foul language on it. This is true so Vampyre puts his coat on and that’s the end of it. Security kind of left us alone the rest of the night but they kept walking by and giving us evil looks every 15 minutes or so.

Other than that, it’s your average boring meeting. Lots of people show up, a bunch of gang bangers walk over to one table and tell Wraith, “You the ugliest motha fucka I ever seen” and informs us all that halloween isn’t until the 31st. Everyone immediately whips out their Day Runners and organizers to jot down this bit of useful information as the gang bangers leave. I go home around 9:00 so if anything interesting happened after that, I sure missed it.

One day, in 1989, my parents and brother left for the day. I forget where they went, but a couple of friends and I decided to make a full day vacation out of it. At 5:30 in the morning I could hear everyone outside of my room getting ready to leave. As soon as they were out of the house and pulling out of the driveway, I was calling up Shonna and Casey and getting ready to leave. We came back to my house for a few hours and performed a bunch of karaoke with my brother’s sound equipment. Then we decided on an all day trip to St. Louis. We took my brother’s car and visited the zoo, the science center, the Arch and some kind of museum. We returned at some point in the afternoon/evening. Here are a few pictures from the day…

One apparently lonely Sunday in 1988, I decided to sit around, writing down every song on Casey Kasem’s top 40 countdown as they were played. And then, even stranger yet, I ended up keeping the list for about 15 years before scanning into my webpage and throwing it away. You can click on the image below to make it bigger. 103.3 KHTR was once my favorite St. Louis radio station until one night, completely unannounced, they switched to an oldies format. I went to bed listening to rock and woke up listening to oldies. This was very devastating. The copyright on the bottom of the page means “Weird Ideas Incorporated.” 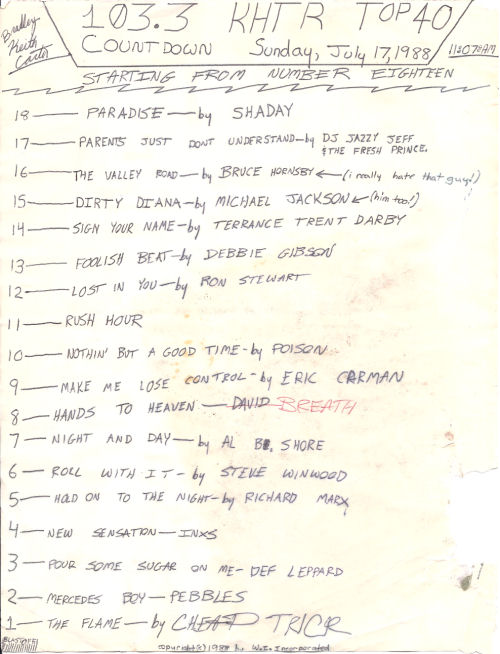 rbcp Leave a comment
April 2002: Here are all of my pictures from Rubicon 4. You’ll have to excuse the blurriness of some of the pictures since I have a crappy digital camera. This year I managed to drag along 4 other people with me to Rubicon – EvilCal (who actually drove up from southern Texas just to go), isotek (known as Wraith in the pictures from last year), Green God (a friend of mine from the St. Louis 2600 meetings) and Adrenaline (another from the 2600 meetings).

Me and EvilCal drove to St. Louis on Thursday afternoon to pick up isotek, green god and adrenaline and brought them back to my house. The next morning we wake up at about 5:00 AM, pack everything into EvilCal’s car and we’re on Interstate 55 by 6:00 AM. We only make a few stops and we end up at Rubicon at about 3:00 PM.

We left the Marriott at about 10:00 AM and decided to make a stop at Cereal City in Battle Creek, Michigan which was about 2 hours away. EvilCal really wanted to stop there on the way to Rubicon but I refused to pull the car over. As much as none of us really wanted to go, EvilCal won and we stopped there just for him. He was even nice enough to pay for all of our tickets to tour the factory and everyone ended up having an excellent time there. In fact, I think that we all agreed that Cereal City was much cooler than Rubicon. Next year we might just skip Rubicon and spend our weekend at Cereal City instead, saving 4 hours of driving time. Maybe we can talk to the Rubicon staff about holding Rubicon at Cereal City next year.

We left Cereal City around noon and drove back to St. Louis. We ended up making a lot of stops on the way back so we didn’t get home until about 9:00 PM that night.

6/24/2002 update: Okay, this is weird. A little over 2 months has passed since Rubicon. When I reserved my room for Rubicon I used my PayPal Mastercard. I did this because I knew there was the smallposibility that we would cause damage in our room and since my PayPal account averages around $3.00 on a good day they wouldn’t be able to bill my credit card for the damages. Good call on my part. A week or 2 after Rubicon, the Marriott tried to charge my PayPal card for about $14.00 or so. It was for the bottled water that we opened and the internet access that we didn’t pay for on the 2nd day. Instead of checking out and paying for it, we just left. We didn’t think it was fair to charge us $4.00 for the water because the sign said, “Your room will be charged $4.00 if you consume this water.” Well we didn’t consume the water, we just poured it’s contents onto the floor. Major difference there. Anyway, here’s the weird part…

This weekend I get something in the mail from the Romulus Marriott. I figure it’s a bill for the $14.00 I owe them. I think “Neat, I’ll stuff some of my daughter’s play money in it and send it back to them.” But I open it up and it’s a check for $9.15.

Attached to the check was a perferated section like you’d get with a paycheck. On that it says it’s a credit because I overpaid. And it’s definitely from the Romulus Marriott. See below:

So is this some kind of evil trick? Are they trying to get me to deposit this check into my bank account so they’ll get my bank account number? Is it an honest mistake where they initially charged us an extra $9.15 when we paid almost $200 for the room? Should I burn the check? Should I wipe my butt with it and send it back? If they really owed me $9.15 why didn’t they take it out of my $14.00?? Should just deposit the damn thing and quit being paranoid? I know I’m just going to lose weeks of sleep over this.