My original plan was to flip the existing stairs leading upstairs around. So instead of leading to the back door in the kitchen, they would come to the door in the living room. That would make the basement stairs end up at the backdoor/kitchen. But after my ex-landlord showed me some old blueprints of the house which originally planned an open staircase in the living room, I just had to try and see if I could do that.

According to the books I’ve read, building stairs is supposed to be the hardest thing a person can possibly take on. I bought a book called Basic Stairbuilding and it says that if you don’t have any (or very little) carpentry experience that you should never try building stairs on your own. But I’m thick-headed and I’m going to do it anyway. These pictures will detail my progress.

A couple years after this began, I moved from this house and I never completely finished up the staircase. I’m sure the new owners have finished it by now, but I’m unlikely to ever see the finished result. I really enjoyed the project and wish I’d gotten a little further on it, just to see how they turned out. I’ll end this page with my most recent picture (September 2005) of the stairs. 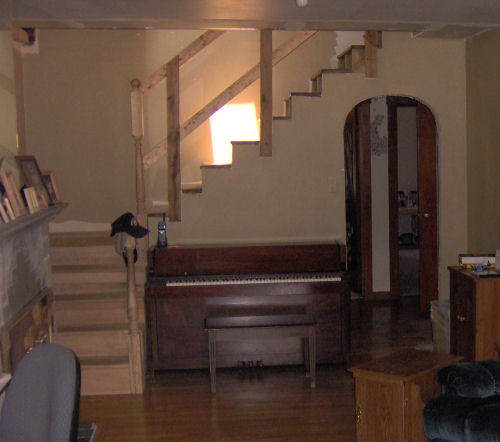 UPDATE: Here’s a picture of the finished stairs, taken in 2008 or 2009, which I found on the current occupant’s Myspace page.