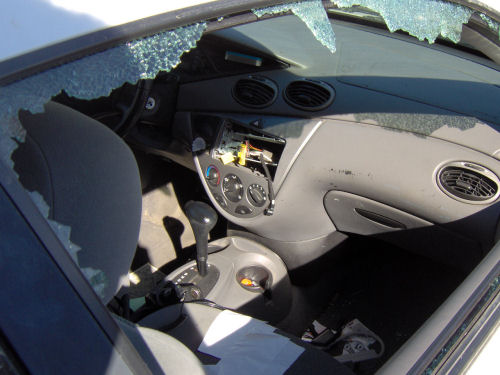 My precious $150 Kenwood car stereo is GONE! This has to be indirectly related to the crackheads next door. This isn’t a bad neighborhood, aside from them. They have weirdos coming over all the time, parking right next to me in the driveway. One of them probably looked in and mistook my stereo as being expensive.

My new stereo is going to be the factory model that came with the car. I’ll just beam my Ipod to the radio. I found one on Ebay for $20 but I was quickly outbid on it. I’m surprised there’s not more of them on Ebay. Anyone know of a local place where I can pick up a factory stereo? Maybe the dealership has them cheap. Or junkyards. I wouldn’t think a pawn shop would bother keeping many of those but maybe.

They also took my cool 3,000,000 candlepower spotlight from the trunk. Not that I used it a lot but it was a cool thing to have. And they made off with about 20 CDs. As in, 20 CDRs. Haha, bet they were annoyed with only getting lousy CDRs. They also took most of my change with amounted to a couple bucks. They left a few quarters in there and one on the floor. The change holder was filled with glass from the shattered window so I like to think that the guy bloodied up his fingers a little, trying to scoop all of the change out.

What they DIDN’T take was my Microsoft GPS receiver which was laying on the floor. And 2 power inverters from the trunk. And some miscellaneous cables from the floor which powered things like my Pocket PC. Those would have sucked to replace.

I need to move. Which sucks because I really like my apartment and it’s location. But the crackheads next door have lived there for 6 – 7 years and I doubt they’ll be leaving soon.