As far as I know, answering machines in the homes of everyone you knew wasn’t really a thing until the late 80’s. I know they existed long before that, but normal people just didn’t have them. My brother and I would occasionally make prank calls in the early 80’s and I remember how weird it was to actually reach an answering machine. It seemed amazing at the time, being able to leave wacky messages for strangers that they would have to listen to when they came home. I brought an answering machine into my family’s home in the very late 80’s (or maybe it was even 1990), when I bought them one for Christmas, but I was so excited about the idea of it that I took it out of the box and played around with it for a few days before wrapping it.

I owned a few answering machines of my own when I was a teenager, for the phone line that I’d purchased for my room. Some of them I would return before the 30 day return policy expired, but I did keep a couple of them. The last one I owned before moving out of my parents house was a Panasonic KX-T1450 (the answering machine from the movie Sneakers), which had dual-cassettes and remote access so I could check messages while away from home. The remote access also let me monitor my room using the machine’s microphone and it let me change the outgoing message. I know all that seems pretty useless for a teenager, but coworkers and I sometimes passed the time by creating wacky new messages for my machine from work.

I don’t remember exactly when I discovered the fun of hacking other people’s answering machines, but it had to be at least a year before I moved out of my parents house because I know I was keeping lists of numbers I’d found that connected to machines and I began recognizing brands based on how they behaved and the tone they used. I also began opening up answering machine boxes at Wal-Mart so I could read the instruction books on how their remote access worked and write down default codes if there were any. The first one I hacked was the same model my parents had, which had a 1-digit access code. Yes, a 1-digit access code. After the beep I had to hold down the single-digit code button for at least 2 seconds and then I was in. The machine I hacked had the same code as we did so I probably ended up getting it on the first try.

Some machines didn’t have any options once you got into them. They’d just play the messages and then hang up on you. Others would let you skip messages or speed forward and backwards through them. Deleting a single message was rarely an option, because almost all machines used tapes and you couldn’t delete a message from the middle of a tape. The best machines, though, were the ones that let you change the outgoing message. I’m sure plenty of people were surprised to call a person and hear whatever weirdness I put on the machines of their friends/family. I really don’t remember a lot of what I did on them. The fun part was just figuring out how to get into them.

Most machines had 2 digit codes and they would only recognize the CORRECT tones and they would ignore the wrong ones, so if you could cycle through 0 to 9 fast enough you’d be in. Three-digit machines were a little harder, but not much because of the same reason. You always knew what the last digit of the code was because that was when the machine let you in, so the next time you called, you’d cycle 0 to 9 for the first digit and then press the 2nd digit of the code.

Zak & I probably hacked a record number of answering machines in the city of Roy, New Mexico in 1995. Our goal was to prank every resident in that town, which wasn’t too hard since there were only a few hundred people living there. A lot of people weren’t home, so we hacked a lot of machines and changed a lot of outgoing messages. We probably hacked more machines than talked to people, and then we had a list of all the numbers and the codes to their machines, so we’d call back and do it again a few days later.

What this is all leading up to is my latest weirdness involving my phone obsession. About a month ago I bought a used computer and set up Asterisk/FreePBX on it. This software allows me to run my own telephone PBX system, complete with full IVR capabilities and about any phone feature you can imagine. A few weeks later I bought a couple of Linksys PAP2T phone adapters from eBay, which allows me to connect 4 actual phones to this phone system. And you can probably guess what I’ve hooked into the system.

I’ve connected answering machines to all 4 lines and people from all over the world have been calling in to figure out how to hack them. The machines have been taking calls all day and night for about a week now. I had to open each one of the machines up and disconnect the speakers in them so they would stop waking me up in the middle of the night when people called in. People have been leaving messages of frustration because they can’t figure out how to get into them, but plenty of others are succeeding, erasing messages, changing greetings, and probably monitoring my room because I haven’t disconnected any of the microphones.

I searched a few thrift stores for old machines to plug into the system and I now own a total of 5 old machines. Only one of them uses tape and it’s probably the least-interesting one since there are no options on the remote features, but I’m hoping to add a couple of more tape machines to it. I might not have spend anymore money on machines, though, because a few people have promised to mail their old machines to me. (You can too! Brad Carter, P.O. Box 465, Albany, OR 97321)

Over the weekend a couple of people donated money to PLA, totaling $50 (Thanks, JagTV and Snorlax Security!), so I was able to buy a couple more of the phone adapters from eBay, meaning this weird thing I’ve created will soon have 8 answering machines hooked to it, sitting and waiting for people to break into them. My plan is to stop at 10 machines, but who knows how long that plan will last. If people keep helping out with the project, it could really get out of hand. But I love that people who never got to experience answering machine hacking, either because they never thought to try it out or because they weren’t born yet, are getting to do it now, and in a way that’s completely legal.

The other cool thing is that I have home phone service again, through this Asterisk computer. I’ve hooked one of the lines into our phones downstairs, so we can use the pay phone hanging in our living room, and the phone in our kitchen. We used to have MagicJack for home phone service, but it expired awhile ago and I never bothered renewing it since we all have cell phones and Skype and a few dozen other ways to communicate with people that make more sense than picking up a home phone. I’m tempted to just start wiring phone jacks into every room of the house, and on the porch, and in the bathroom, and the closets, but yeah, I sure won’t do that. Nope, not me.

I’m really excited about the whole project, though. I’ve played around with Asterisk a few times in the past, but I never got as far as actually hooking up physical telephones to it. Around 2009 I set up a system with an incoming number that did a few IVR things, but I gave up because it was constantly crashing, it turned out because of bad RAM in the machine. I’ve got all kinds of plans for this thing, though. Fun stuff, that people calling in will enjoy playing around with. And fun for me, just to play around with this amazing combination of old tech and new tech. So thanks, Asterisk and FreePBX, for creating this completely free software that lets people experience the fun of running their own phone system. 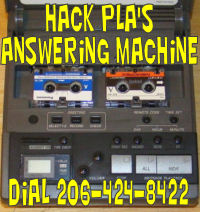