December 2, 2002 rbcp Leave a comment
Mondady, 12-2-2002: Took the kids to Jamestown Mall for a few hours to play, got some new jeans for me. Sunday, 12-15-2002: Nice outside today, 60 degrees. Worked on the deck while the kids played in Tom’s dirt pile. Dropped off phone records at Maria Moore’s house on my way to take the kids to Colleen’s for the night. Emily was feeling sick and Colleen ended up taking her to the hospital later for her breathing problems. Payton came back to my house while she did that and he ended up having a fever too when I got him home. Monday, 12-16-2002: Emily and Payton both stayed home sick today at Colleen’s. Tuesday, 12-17-2002: Emily stayed home sick with me. I worked off and on all day while she watched TV and played video games. Payton went to school though and I picked him up around 4pm. Monday, 12-23-2002: No school for Emily today because of Christmas vacation. She stayed home all day while I worked in my office. Casey came over and kept her busy playing Halo on Xbox for most of the day. Tuesday, 12-24-2002: Both kids stayed home with me today. I was planning to work but never got to. I called Shonna and arranged for Brianna and Meagan to come over for the day. I picked them up and we went to Wal-Mart for me to get Christmas gifts for Shirley and Colleen. Then we all went to see The Wild Thornberry’s new movie at Eastgate. It had started snowing when we went in the theater and by the time we got out there was an inch or 2 of snow on the ground. Came home and played in that for awhile. Later me, Emily and Payton went to my parents house and had some supper. Got the kids to bed early and just now finished up their Christmas stuff. Now I’m sitting on the couch eating Santa’s cookies. Friday, 12-27-2002: Woke up sick. I stayed in bed until 10am, then I went to the post office and Piasa Pantry. That was a huge mistake. I didn’t think I’d make it home because I felt so bad. When I got back, I layed on the couch pretty much all day and slept about half of the day. Didn’t eat anything, threw up, felt horrible all day. Got my brother to bring me a Pepsi sometime in the afternoon. Around midnight I started feeling better and got to play on the internet for about an hour before going back to sleep for the night. Saturday, 12-28-2002: Felt much better today. Just hung around the house all day playing with the kids. Took them to Alton Square and Godfrey McDonalds for supper. Monday, 12-30-2002: Payton went to school and Emily stayed home today. She played with Casey most of the time while I worked. Tuesday, 12-31-2002: Amy came over this evening and we had a new years party for my kids and hers and Ryan. We all stayed up until midnight or so, then they all went home. Me and Emily stayed up for a little while listening to the police on my scanner.

November 2, 2002 rbcp Leave a comment
Saturday, 11-2-2002: Went to a holloween party at Kristine’s with EvilCal and the kids. After that we took the kids to Sheila’s to spend the night. We ended up going out to some bar in Westport with Jennifer. I drank a lot and drove home since I was apparently the most sober. Sunday, 11-3-2002: Me and Herman went to see I Spy in Edwardsville. After that we snuck into Jackass and watched the last half of that. Decided to finish the Elephant & Bird show video so we got some supplies at Wal-mart and worked on setting things up until about midnight. Then I wimped out and went to bed. Monday, 11-4-2002: Worked for a few hours, then finished up our E&B video stuff. Went to downtown Alton to get some outside pay phone footage. Then ate at some crappy taco bar by the pay phones we filmed. Tuesday, 11-5-2002: Took Herman to the airport so he can fly home. We ate at some bar-b-que place first, then I dropped him off. Wednesday, 11-6-2002: Amy took me to eat at Applebee’s. Then we came home and watched Groundhog Day. Friday, 11-8-2002: Had Sheila’s kids all day while she helped her sister Jennifer move. Around 3pm we swapped, she took my kids for the rest of the day while I helped Jennifer move furniture. Got home around 10:30pm. Saturday, 11-9-2002: Took the kids to the donut shop for breakfast. Then we went to Walgreens to buy flashlights and explored the caves by the Piasa Bird. Didn’t do a whole lot of exploring, just mainly went into the main cavern and looked around, then hiked up a trail along side of another entrance. Got a little work done on my deck today. Went to Best Buy at night to get a new 120 gig hard drive since my 40 gig died last week during E&B editing.

The pictures below only show the well lit areas since my camera doesn’t have a flash on it: 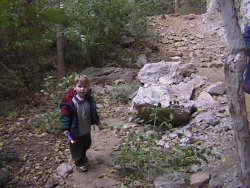 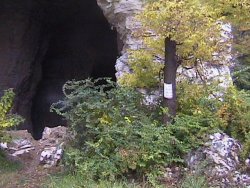 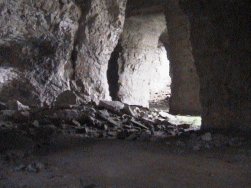 Sunday, 11-10-2002: Took Emily and Payton to see Pokemon at Eastgate. Monday, 11-11-2002: Today’s a holiday so I couldn’t work very good. Sheila called and me and her ended up taking all of our kids to the St. Louis science center. Stayed there from about noon until 4pm. When I got back to my car that I’d left at Hit N Run, noticed I had a flat tire. That sucked. Tuesday, 11-12-2002: Took my tire to Rob’s to be patched. Then spent over 2 hours sitting in the DMV waiting to renew my expired driver’s license. I did not have a productive day. Friday, 11-15-2002: Quit work early to take the kids to see the new Harry Potter movie. Friday, 11-22-2002: Went to Applebee’s with Linda, then to her house to watch Star Trek. STAR TREK. I don’t like Star Trek, never have. Sunday, 11-24-2002: Worked on the deck & played outside with the kids. Took Emily and Payton to Burger King for lunch, stopped by my parents for a little while. Wednesday, 11-27-2002: My brother went with me to find some mini RC cars for the kids’ Christmas. Finally found some at KB Toys. Thursday, 11-28-2002: Hung out at my parents all day for Thanksgiving. Saturday, 11-30-2002: My brother came over and hung out pretty much all day. Had pizza with him and the kids, played a lot of Dragon’s Lair on Xbox. Later I went to see Solaris with Linda at Eastgate which sucked. Then hung around my house for awhile which didn’t suck so bad.

October 6, 2002 rbcp Leave a comment
Sunday, 10-6-2002: Took the kids to Jamestown Mall to play again. Mostly played on the slides, but went to the pet store and the ice cream truck ride outside the petstore. Emily kept stealing rides from other kids whose parents were putting money into the rides. Friday, October 11th, 2002: Look at this annoying church lady, leaving literature in my door. 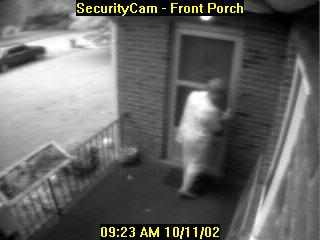 Snap from my front porch cam. I think that’s Tiffany and Zach from down the street. Emily and Payton are the 2 kids inside.

June 18, 2002 rbcp One comment
Tuesday, June 18th, 2002: Today RijilV and Chris visited me, on their way to Arizona from Michigan. We spent the day harassing Hardees frequencies, Target frequencies, hanging out in downtown St. Louis and trying to start up a UFO hoax/scare. Here are a few pictures…