So my quest to save Calimar from marriage was a complete failure but I still managed to have a really great time this weekend. I present to everyone…

I’m referring to it as a con because it seemed like a mini-hacker con to me. I met people there that I usually only interact with online. I met, for the 2nd time in my life, Jammie who founded the #rock channel a decade ago. I met a guy I didn’t know but who said to me, “Yeah, you used to prank call my dad all the time and you would really piss him off!” Not to mention that there were PLA Bells on the wedding cake and cactus confetti spread all around them. Cal’s wife arranged that herself so she can’t be that bad of a person! I didn’t take many pictures myself so I’m planning on stealing Jammie and Laura’s pictures as soon as they’re all up online. For now, though, here are a few of my pictures. More will be added soon… 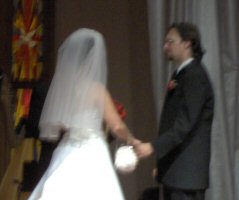 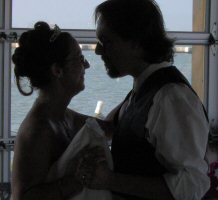 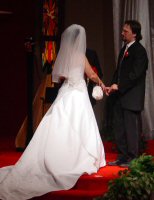 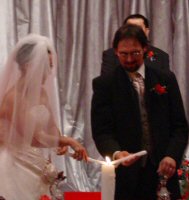 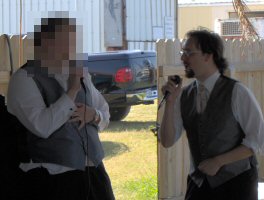 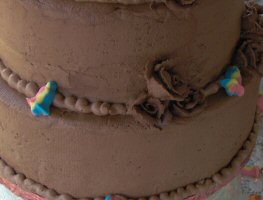 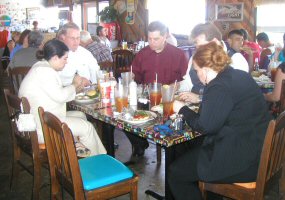 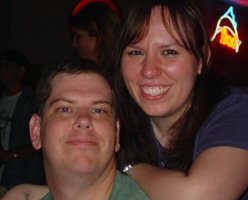 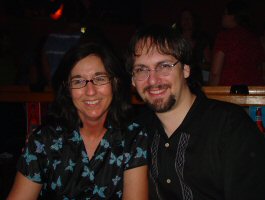 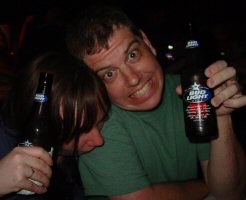 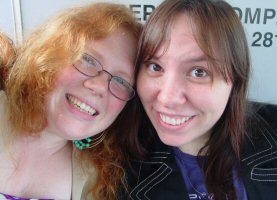 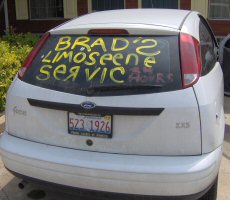 I had 2 pictures of the PLA bells on the cake but one of them got corrupted in the transfer from my SD card and it happened to be the better picture. Dammit. Hopefully Jammie took one too so I can put it up. The picture of Calimar singing with one of the groomsmen – they’re doing karaoke of the song Girls Just Wanna Have Fun. In girl voices. I regret not bringing my video camera for that. On Sunday I drove a friend several hundred miles home to help him avoid airfare. So I thought the Limo thing on my back window was fitting.

The weekend was great fun. I ate at restaurants all weekend and I never seemed to be able to pay the tab because someone always beat me to it. Damn you nice people! I finally managed to pick up the tab on our piddley breakfast Sunday morning before we left. On Friday night we all met at a bar called Chances and stayed there until about 2am. I ended up sleeping on the floor in D’s hotel room. I’d slept on Cal’s couch the night before and it was comfortable and everything but he had these animals in his kitchen (sugar gliders, I think they’re called) and they made horribly annoying noises all night and kept me up. I don’t think I slept for more than an hour at a time. The hotel floor was much quieter.

On Saturday morning we got up and did some running around town with Cal, going to a few stores and gathering random things that were needed for the wedding. Ate breakfast with a bunch of people at some mexican place. The wedding ended up lasting maybe 30 or 40 minutes. I ended up being one of the ushers in the wedding which was fine with me since it required minimal responsibility. At some point, Cal’s fiance, Anita, decided that I would be the one to walk her down the isle and give her away. I text messaged this information to my friend Amy on Friday evening and she replied, “That will be an easy way to keep Cal from getting hitched. Just before you walk her down the isle, chloroform her and lock her in the closet. That way Cal will just think she is another runaway bride like that one chick on TV.” I thought that was a hilarious idea so I passed my cell phone around the table for everyone to read the text message. I’m thinking that perhaps this is the reason it was decided that I wouldn’t give Anita away. She probably wasn’t sure if I was joking or not.

After the wedding was the reception and then me and a few others went to Corpus Christi to see Revenge of the Sith. I’m not really a big Star Wars fan but it was still a good movie. After the movie we hung out in a place called Habeeb’s Corner and ate pizza for awhile. Then me, D, Laura and Jammie went in search of a beach to run around on. We made a quick pitstop at a stripclub along the way that was actually just a double-wide trailer with a sign on top reading ADULT CABARET. We stayed there for less than 3 minutes and then continued to Rockport in search of the beach.

You’d think for a town which is practically an island, we could find a beach. But it was dark and all we could find were fishing piers. None of us were FROM Rockport and I’d sure never bothered looking for a beach there before. We actually stopped at a Circle K and asked the clerk where the beach was. Eventually we found a suitable beach. Laura and Jammie, who are from DC and NYC, really wanted to see a Texas beach. And they got to see it, overgrown with moss, roaches, fishheads and a terrible smell. We eventually found a much cleaner section of beach and Laura convinced me to run around in the ocean with her. In my clothes.

That night ended around 2am or so. The next morning after our breakfast and goodbyes, I gave D a ride to his house, a few hundred miles away and then I made it to Muskogee, Oklahoma and crashed in a Super 8 for the night. I was really hoping to make it to Missouri before stopping, but I was tired. I got home on Monday around 5:30pm. I’d hung around Muskogee all morning, working from my cell phone, which is why it took me so long to make it back to Alton.