I’m sitting by the window here in the living room and a white minivan pulls up and parks in the spot where people usually park when they want to come and see me. They sit in the van for awhile, then old people start pouring out of it all holding notebooks and papers. “Oh shit, what’d I do??” I’m thinking. Then I quickly realize that they’re just door-to-door religious salespeople. They want to spread the word of God to me and my neighbors. The 2 men in the van head to Tom’s house and the 2 ladies start coming up my sidewalk. Before they even get up my steps I open my door and tell them “No thanks.” very politely and slam the door. I also snap a picture of them as I say it, but it doesn’t come out too good.

After knocking on all the doors on my street, they move onto the next block. But they leave their van behind. I decide that I should leave them some Satan literature on their windshield or something. So I start searching Google for good Satan pictures and text. But I don’t find anything very appealing. Finally an image search turns up a t-shirt that says “I [HEART] SATAN” which seems perfect! I quickly turn the image into a bumper sticker, print it up and run out to their van. After making sure they’re not on their way back, I slap the sticker on the van, take a few pictures and then run back inside. Aren’t I rebellious??

Less than 5 minutes after I’m back inside, the 2 men come back down the street and get into their van. I guess the ladies were still on the other side of the block, spreading The Word. Seeing 2 old church men drive past my house with an I LOVE SATAN bumper sticker on their van made me giggle uncontrollably. I tried to get a picture of them driving away but it didn’t come out very good. I’m pretty sure I won’t go to hell for this one. God has to think this is hilarious. Here are some pictures… 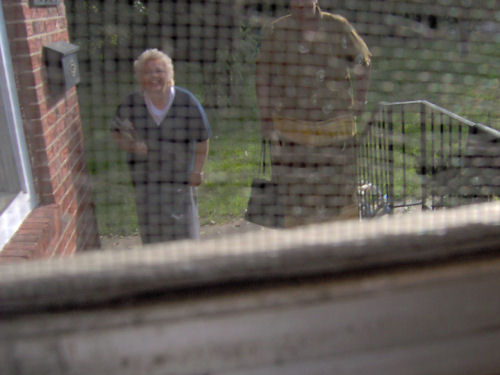 A bad picture of them, taken from behind my screen door 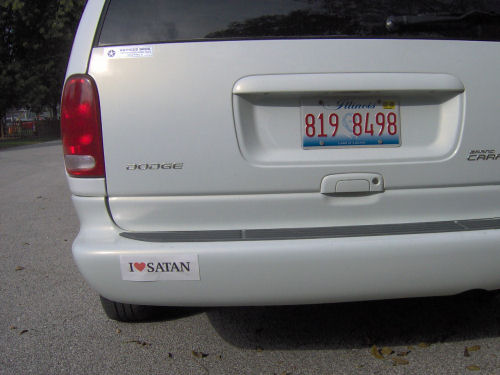 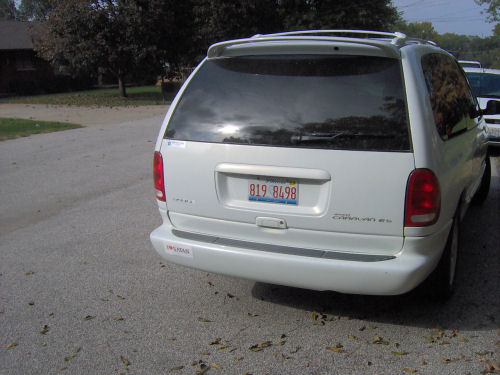 One more quick shot before I sprint back to the house 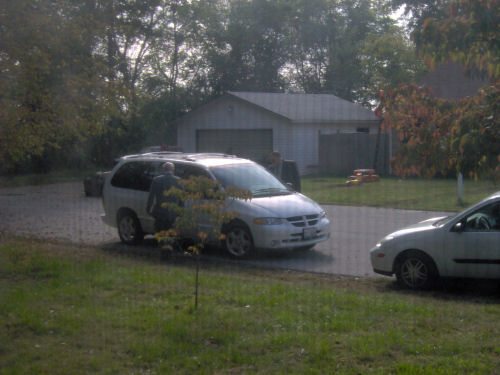 You know what makes this even more hilarious? These people are probably spending their entire day knocking on doors and spreading the word. And the whole time they’re going to have this bumper sticker on their van. Somebody might see it! And that’s just funny. Maybe it’ll even last until Sunday and somebody at their church will question it. Maybe they’ll get thrown out of church forever! Maybe God will think they did it and then not let them into heaven. I was pretty quick about placing it on there, afterall. I bet God didn’t even see me.

4:17pm – Mark Twain was a blogger. He started keeping journals around age 17, filling them with travel adventures, mundane daily stuff, drawings, girls phone numbers, facts, etc. I guess 50 of his journals still exist today and about a dozen of them were lost. Weird to think that if he were around today, he might be on LiveJournal.

I’m really enjoying his bio, read it on my plane ride home last night. He once traveled from Alton to New York City too! Well, from St. Louis to NYC, but by way of Alton. And it was more of the railroad/steamboat variety of traveling, not so much of the quiet 3 hour airplane trip traveling.

Joe stopped by today. After hearing about what I did to the poor innocent church people, he said that I can screw up just about any way possible with him now and he’ll still like me. Apparently I’m allowed to borrow $5,000 in cash from him, leave town and never pay it back and he’ll still think fondly of me. That’s the example he gave. And Joe is very religious too!

4:53pm – More about the barking dog on the street! I went to Richard & Shirley’s to pick up my mail today and got to hear some barking dog news. I guess the barking dog neighbors are being really cautious with me around since I wrote the letter. But apparently they noticed that I left for the weekend and let the dog stay out all day on Saturday and Sunday. Then on Tuesday night, after it’s out for 12 hours and barking Richard finally calls the cops on them! The cop comes over and files a report and talks to the people about their dog. The people have no idea who called the cops, but they speculate to the cops that it was probably either Richard & Shirley or me.

They’ll probably think it’s me since my car was back in it’s spot within a few hours. The dog people actually told the cops that the barking dog wasn’t the only problem on the street – Tom’s kids (and all the other kids on the street) were pretty noisy sometimes too. Which has to be the lamest attempt ever at trying to make himself look good. He also said he never lets the dog stay out more than 30 minutes at a time which is a complete lie. So all that is fun. I wish those neighbors would retaliate against me or something so I’d have something to occupy my time with! They don’t even give me dirty looks when I drive by. I’d love to figure out a way to make their phone ring nonstop and have a recording of their own dog barking at them when they pick up.

R&S thought it was funny when I said, “Hey you know those religious people that came to your door earlier? Look what I did to their van!” and showed them a photo.