So today…got the invitation for CNBC first thing in the morning. The kids and I had breakfast at the cafe around the block. Around 1pm, we drove to Portland. Hung out at Lloyd Center mall for about an hour. Emily did some ice skating while me and Payton watched. Then went to the studio, about a mile away from the mall.

Sat around in a waiting room for awhile, then went into a studio. The interview was via satellite, so it was just me, the kids and a producer. Hooking me up to the show (I think it was based in NYC) required the producer dialing a few numbers on a couple of phones and leaving them off the hook. Once that was done, I could hear the show in my earpiece and I guess they could hear me. Strange that the audio seemed to be done via a few phones, even though they had the video feed going too. Kind of makes me wonder if I could get the phone numbers they use and hijack the phone lines. Muhaha… The first thing I heard once my audio was working was some kind of promo mentioning Wal-Mart and terrorism. When I heard that, I’m thinking, “Oh great, they’re going to yell at me for being a mean person…” Jammie told me later that they’d called it Corporate Terrorism. I was all worried before the interview that they were going to say that terrorists could use my methods of bothering Wal-Mart to overthrow the U.S. Government.

The interview lasted maybe two minutes. It went okay, I guess. I didn’t get ambushed and the anchor guy was friendly enough about it. I was all prepared for them to ambush me. On the drive to Portland, I’d decided if they called me horrible I would just agree with them and tell them when I wasn’t harassing Wal-Marts, I was out beating up old ladies in the street and setting small animals on fire. But that didn’t happen. He asked a few questions and I answered. I was thrown off a few times and stuttered a little. They played the Christmas Bows call and the call where a customer asks me for directions to the store. And that was it, it was over. The producer from New Jersey talked to me afterwards and told me that I did great and she thought the segment went flawlessly. It was a really fun experience overall. Big thanks to everyone who hounded me into going. And thanks to everyone who left suggestions and encouragement in my previous LJ entry.

The lady in the studio with us laughed when she heard Christmas Bows being cued up before the interview. And she smiled and chuckled as they were played during the interview. After it was over, she asked me all about phonelosers.org and said she would have to visit it. She wanted to know if we’d really taken over a Wal-Mart’s paging system like that and she was surprised when I told her it was actually the Fred Meyer store just a mile or 2 away. I’d told the producer that it was a Fred Meyer too, I guess she just wanted to go with it being a Wal-Mart so it would match the story better. That and half the country has probably never heard of Fred Meyer. The studio lady remarked how incredibly well-behaved my kids were and Payton talked to her nonstop about random things for 5 minutes after the interview was over.

The kids and I went back to the mall and had supper in the food court and then saw Cheaper by the Dozen 2. Payton continually called it Mine, Yours and Ours 2. Pretty witty for a 6-year-old. Played a few games at Tilt afterwards and then drove home.

A few people were supposed to record the TV show but so far all those have fallen through. Jammie’s dad screwed up his attempt to record it (damn adults and that modern VCR technology), her friend Rob completely forgot and Apok0lyps’ Tivo didn’t work. Gordo said he got it recorded, so maybe we’ll get it from him. I’ll put the video up on phonelosers.org when/if I get it. 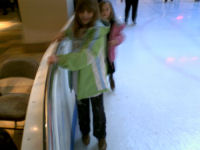 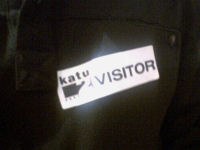 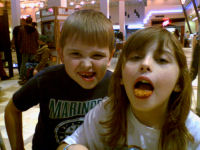