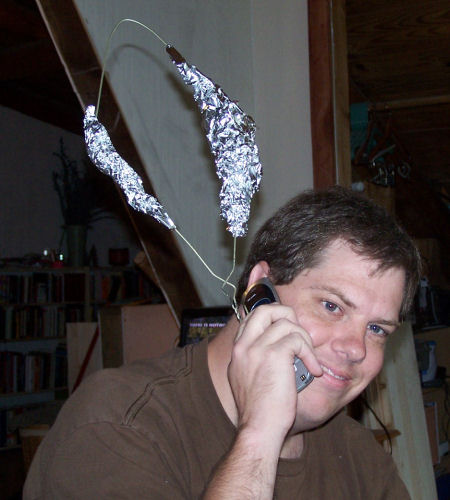 Cellular reception in the mountains of Idaho was a real bitch, but some antenna hax0ring fixed things right up. I’m back in Oregon now after 6 fun-filled days of Idaho.

Today I went to the post office to find a nice surprise – my Oregon license plates! After about 10 months of living here, I’m finally an official resident. Now people on the road won’t be able to yell, “Hey moron, go back to Illinois and learn how to drive!!!” anymore. They’ll have to stick to generic obscene hand gestures and stuff.

Not only did I get license plates in the mail, but I also got new checks for my checking account. I never bothered getting new ones since I only use checks to pay bills and rent and they never seem to care if I have an Illinois address on them. But a couple weeks ago they ran out so I had to order more and I put my new address on them. I’m feeling really Oregonianish today.

In sadder news, my bike was stolen a couple weeks ago. Right from my fenced in patio. I’m pretty sure kcochran did it since he let it slip that he’s been stalking around my house lately. I want it back, kcochran.

I’m now officially averaging one stolen bike per year. Last summer someone stole my bike from our deck. I didn’t really care too much about that one since I didn’t want to lug it to Oregon anyway. Plus I’d owned that one for 5 or 6 years. This one I’ve only owned for maybe 5 months. Luckily it was a very cheap bike so it’s not a huge loss. But it’s annoying that I have to DRIVE to the post office and everywhere else now.

And I can’t believe it got stolen from my patio when I never lock it up anywhere in public. I leave it sitting in front of the mall, at convenience stores, at Wendy’s, the bank, the post office, etc. I never lock it up. But the one place it finally gets stolen from is my fenced-in patio. At least they didn’t take off with the kids’ bikes. I’ve been padlocking the gate since that happened. Next time I’m going to buy a crappy old used bike from a thrift store instead of a clearance bike from Target. That is, unless kcocran decides to return it before I get around to buying a new one.