I’ve been wanting to get a cat ever since I moved to Oregon and today we finally picked one up. 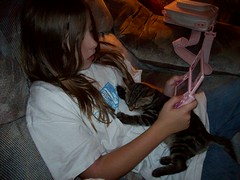 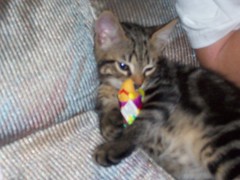 He’s going to be strictly an indoor cat since we don’t have a yard. So far he’s gotten to know the house pretty well and we’ve teased him to death with the laser pointer. He doesn’t have an official name but the kids are talking about naming him Charles or Chuck. I’m not sure why. They’re also going over names of Halo 3 characters. Hopefully they’ll settle on something this weekend.

Here’s something I videotaped last month. We built a cage around a Roomba to trap it. It worked for awhile but eventually it escaped, proving that these things will soon enslave the world.