Thursday I visited the rental office and signed the papers for the new apartment. Or, townhouse, they call it. I don’t know what that means, but it sure looks like an apartment to me. We did an inspection of the apartment and it was officially mine. I ended up taking carloads of things over all day since work was dead. I think I quit at 11pm that night. Also I picked up the kids from school even though I didn’t have them that day, just because I was excited to show them the new place.

On Friday the kids were home from school so I didn’t get much moved since they took up too much of the car space. Around noon we rented a U-Haul and they helped me fill up the back with tons of stuff. I think we took just one load in the U-Haul, then spent some time in the new place, organizing and cleaning. We also officially moved the cat – he was pretty freaked out about the car ride and the new place. Colleen picked up the kids around 5:30. That night, a guy from Craigslist came to help me move all the heavy stuff. I was starting to get worried since he was 3 hours later than he planned to be and my U-Haul had to be back at 8:00 the following morning. But once he arrived, he was great. We got everything moved in just two truckloads. The couch was the worst and we could barely fit it in the front door of the new place.

When we first arrived at the new place, the cat came down and greeted us. Then he disappeared. After not seeing him for awhile, I started to worry that he might have run outside while one of the doors was open. So me and this guy, Alex, start searching the apartment and calling for the cat. I thoroughly search each room, looking up on shelves, under blankets, and behind everything. No cat. We walk around outside, looking for him in bushes and stuff. No sign of him. So we leave the garage door open a few inches, just in case he’s outside.

We go and pick up the 2nd load from the old place and bring it back. And still no cat. It’s pretty unusual since the cat is always running around when people are here. I’m starting to get kind of worried. The kids would be really upset if the cat turned up missing. Alex and I do a little more searching, both inside and out, and then he leaves. I start searching rooms and closets, shutting doors as I’m 100% sure that the cat isn’t in a room. After maybe 20 minutes, I’m finished and still haven’t found him. I decide that I’m going to start searching outside so I head to my room to get my flashlight. I’m starting to think about what picture of the cat that we’ll use on LOST CAT posters and I’m thinking maybe I’ll sit on my porch for half the night, hoping to see the cat running around in someone’s yard. And there’s the cat, right in the middle of the hallway.

At the time I had no idea where he could be hiding, but after telling Emily about it yesterday she told me he was probably inside the couch. If he wasn’t there, then he’s found a pretty amazing hiding spot. But yeah, he was probably in the couch. Later that night I took my first walk to 7-Eleven! It’s just 3 blocks away, which to me is a major perk of living here. Dari-Mart was 8 blocks from us at the old place, which was a little too far for a quick walk for a snack. I’m going to love having a 7-Eleven so close. I got some Nutter Butters and an empty cup for milk. That was my supper.

Saturday morning I woke up at 7am to take the U-Haul back. I had to stop by the old apartment to use my broom to sweep out the back of the truck, then put $5.00 of gas into it. Got a McGriddle for breakfast and went back home to wait for the cable guy. The kids came over around 9ish and they spent the day playing and occasionally helping me clean and organize things. 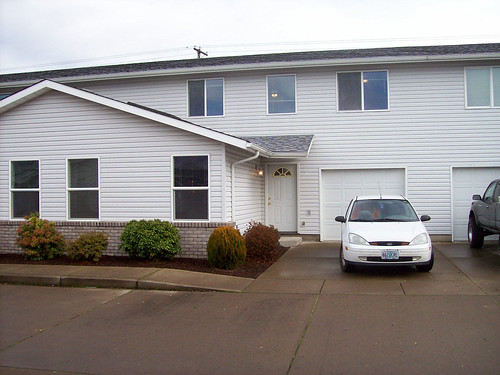 I can’t get over how much I like this new place. Warren issues aside, I’m just liking it here tons better than the old apartment and it’s worth every bit of the increased rent. My closet and room are huge. I could easily fit 3 dressers into the closet and still have room to walk around in it. Not that I have that many clothes, but it’s great that I can stuff all my bedroom stuff into there and have the rest of the space (aside from my bed) for nothing but office. My giant wall of shelves is several feet longer than in the old office. And it’s so nice to have a garage to store things in. Things like empty boxes, computer parts, random electronics and car parts. I had to keep all that junk in my room before. And no more scraping the ice/frost from the windows in the mornings!

The neighborhood rules and there’s a cool park about 10 blocks away that we walked to yesterday. There’s also woods everywhere. We went for a long hike in the woods next to the park yesterday. It was freezing, but fun. I’m going to search them for Geocaches soon and if there aren’t any, we’re going to place a new one there. 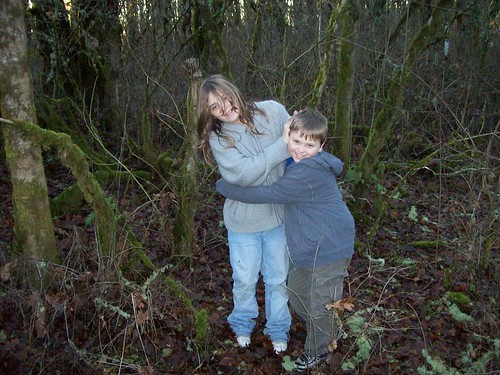 There’s woods right next to the apartments too that are fenced off, but easily accessible if we enter from the other side. I’m sure we’ll end up checking those out once it gets a little warmer out. On the downside, I can’t walk/bike to the post office and lunch anymore since I’m no longer close to downtown. Not that I could bike there anyway since Warren kept stealing my bike. But on the upside, I can walk to school now!