Membership Cards on my Cell Phone

I’ve never been a fan of fat wallets. I like something slim, that I don’t even notice in my back pocket. My wallet has almost always been one of those 2-panel deals, where one side is a clear window for my drivers license and the other side is for my few debit cards, library card, membership cards, and whatever else. I don’t keep receipts, pictures or cash in my wallet just because I don’t like the thickness all that stuff creates.

Every once in awhile I go through it and throw out the membership cards that I don’t use that much, to keep the bulk down. The unfortunate side effect of this is not having certain membership cards when I need them. Like earlier this year when I bought 3 used games for Emily’s birthday at Gamestop, my Gamestop card would have given me a free game. Luckily the Gamestop guy was nice enough to let me use his own card that time. I hate the very idea that I have to carry a card with me to get discounts like that. Like at Albertsons, I can save $10 – $20 per trip by having my card with me. Why can’t they just make it that cheap for everyone so my keychain isn’t loaded down with membership cards?

I finally decided to try something that I read about in a blog earlier this year. I scanned all of my barcoded membership cards into the computer, edited them into a nice looking 320 x 240 JPG, and put them in my cell phone. Now when they ask for my card, I can have them scan my cell phone screen. Here’s what they look like on my cell phone. 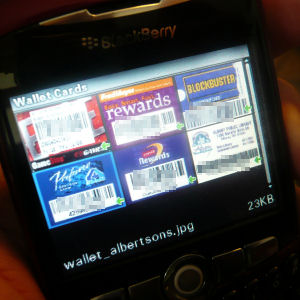 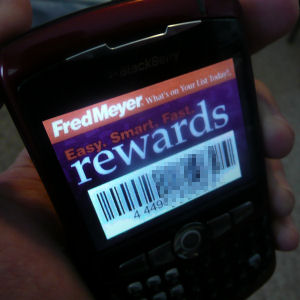 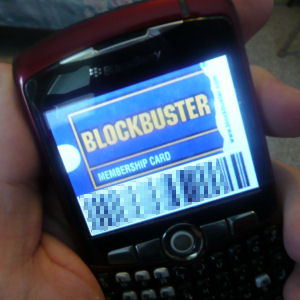 I pixelated portions of the barcodes on these images, in hopes of keeping you stalkers from giving me reward points at Fred Meyer. The scanners are able to scan these cards just as well as they can scan a laminated card. Now all I have to deal with is the weird looks people give me when I hand them a phone to scan instead of a card. So far I haven’t been turned away by a rogue employee enforcing a new “no cell phone membership cards” policy, but I’m sure that’ll happen if I give it enough time.

I put all the card images in a folder on my phone called “Wallet Cards” so it’s easy to quickly pull them up while I’m waiting in line. Another thing I’ve always done to enhance my thin wallet lifestyle is keep pictures of my kids in the cell phone too. So if I feel inclined to show off pictures of my kids (or myself, posing with MC Frontalot) I can pull them up on my cell phone instead of digging through a giant wallet for them.

I think this is something that could work on almost any phone. I’m not sure how well a scanner could pick up on one of those tiny screen cell phones, but it’s worth a try. You probably don’t even need to be as fancy as me about it – just snap a picture of your barcode with the phone’s camera and that would probably work just as well.