A few months ago, Spessa and I were driving around and she spotted a crazy sign in this guy’s garden, right across the street from the post office. 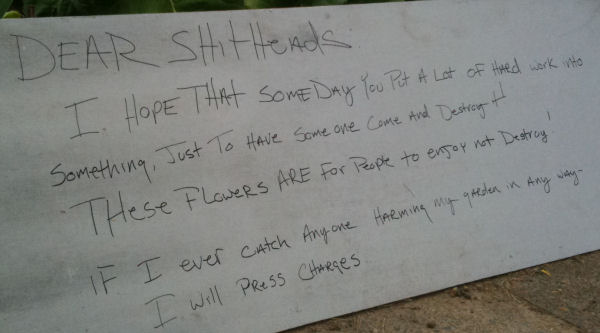 We drove around the block and I got out and took a picture of the sign while two guys on the porch eyed me. I sent it to the passive aggressive notes blog, but they never used it. All that month I kept noticing that kids kept drawing on the side of the post office, under the windows, with chalk. The only thing I remember is an anarchy symbol, but there was other random stuff too. They also kept writing WELCOME in chalk on the ground in front of the post office doors. Just kids being silly, right?

So weeks later I’m walking to the post office, past the chalk drawings under the window, and the guy in that house is screaming “FUCK YOU” over and over in my direction. I ignore it and continue into the post office. I’m not sure if he was yelling it at me, because it sounded like he was already yelling when I got out of the car. But weird…

The NEXT day, Spessa and I noticed caution tape all over one of the sets of doors. Then later that day, I’m reading the local police log from my RSS feeds and I see this:

Post office vandalism â€” Police received a call from the 520 block of Second Avenue S.E. at about 12:45 this morning, saying a man who lives across from the post office had been screaming off and on for the past two hours. A deputy responded and found a man visibly intoxicated and being very loud. Police calmed him down and were about to leave when an officer noticed one of the south side doors to the post office had been shattered by a rock. They also saw â€œdisturbingâ€ messages referring to Fort Hood and 9/11 scrawled on the walls of the building in what looked like chalk. Police talked to a witness and she said she saw the man at the post office then heard a loud crash. The man had fresh cuts on his hands. Trent A. Fox, 38, of Albany was cited for second-degree criminal mischief.

It seems as if this guy has been drawing on the post office with chalk for weeks now! Two or three weeks later, Payton and I are stopping by the post office and there’s a TREE in the middle of the road. Someone had dumped a bunch of potting soil in a pile on one of the lanes and it looked like there was a small tree planted in it. Next to it was a large potted plant. I grabbed a handful of change from my car to give to the Salvation Army bell ringer so I could ask her what was up with the tree. She told me the guy in house over there did it earlier that day and I told her about his other crazy antics. I don’t know why I didn’t think to take a picture of the tree in the road.

The tree incident didn’t make the police log this week, but I can’t wait to see what this guy will do next.