One day, after watching just a little too much Scooby Doo, I suddenly had the urge to build secret bookshelf doors that led into my office. We were in the process of renovating the attic at the time and hadn’t gotten around to putting a door up for the office yet, so it was pretty easy to get started on this project. I only took pictures of the doors after they were partially completed, so you can only get a vague idea of what they would have been like. 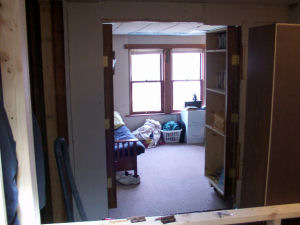 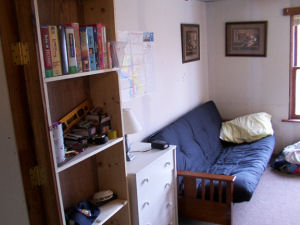 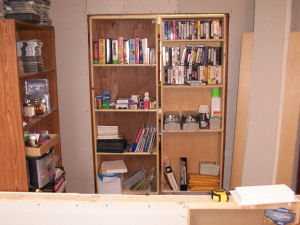 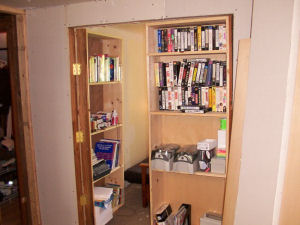 The backs of the shelves had 1/8″ plywood on them to help reduce the weight and the shelves were pretty deep at 10″. I ended up putting a wheel on the bottom of each door to keep them from sagging down. The only bad part about that was that it began to leave an impression in the carpet where the wheel traveled.

Obviously the trim was never finished on them since you could see through all the tracks. Before I got around to finishing the doors, some changes to my life occurred (divorce, etc.) and I went in a different direction with my renovations. This involved, among other things, bringing the bookshelf door out about 8 feet, so that it was even with the edge of the stairs. This gave me only enough space for a normal sized door.

So I decided to try the hidden bookshelf door once again, only this time with a single bookshelf. I also lightened the load of the door by cutting the depth of the bookshelf down to about 4 or 5 inches, which was the perfect size for storing video tapes. Since video tapes were pretty light, they were perfect for keeping the weight of the door to a reasonable level. 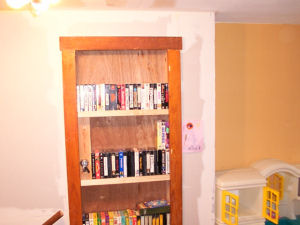 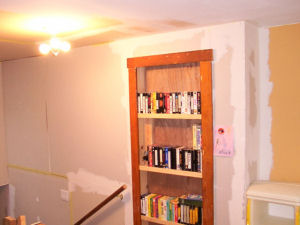 I got slightly further on this version of the door by finishing up the trim and installing a deadbolt lock on it. Aside from the trim on the bottom and painting the wall around it, it was finished. I can’t remember if I ever got any of that stuff done before I moved. 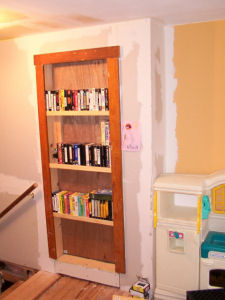 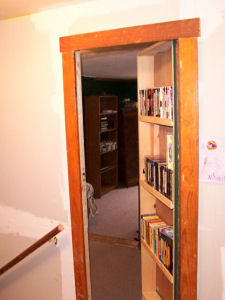 I moved from this house shortly after the secret door was finished so I only got to enjoy the coolness of it for a short time. It was a fun project, though, and maybe someday I’ll be able to make an even better one.