In 2004, I decided that I needed a laptop mount for my car, so I could surf the net and watch movies while I drive. Oh yeah, and watch a GPS screen. At the time I was driving across the country a lot, so my GPS was being extremely useful during this time. The only problem was that I had to set my laptop on the passenger seat, making it hard to see since it was always slipping around.

So I look for laptop mounts on the net and find them selling for hundreds of dollars. I think one was close to $1,000. On Ebay it was better, but not much. About $200 for a laptop mount. Then I saw an Ebay auction that showed you how to build your own laptop mount with pipe fittings for $2. So I purchased it and was sent a PDF file, telling me which pipe fittings to buy. I realize I could have just figured it out myself, but it was nice to have them tell me the exact measurements of pipe fittings I would need.

Even though I lost the original instructions for building one of these, I’m going to try and pass along the knowledge anyway. Everything I needed was found at my local hardware store. The pipes used are 3/4″ gas pipes. The total cost for my materials was about $20 and it only took a couple of hours to put it all together.

The plans I was sent suggested using wood for the top. The ones I saw on Ebay for $200 used metal on the tops. I decided to rebel and used fiberglass instead, mostly because I happened to have some in my basement. I cut a piece that measured 13.5″ by 11″ which is just slightly larger than my laptop. I rounded the corners with a jigsaw and drilled 4 holes in the middle to mount the pipe.

The metal piece along the front is meant to keep the laptop from falling off while you’re driving. I don’t know what that’s called either, but I found it at the hardware store and it only cost a few bucks. I also stuck some velcro strips on the fiberglass and matching strips on the back of the laptop, just to make sure it didn’t fly around the car while I was driving.

My plans suggested mounting the bottom part on a heavy piece of wood that would sit on the floor. But that didn’t seem like it would be very sturdy to me, so I actually drilled some holes into the floor of my car and mounted it to the floor. The screws stuck up about an inch from the floor but were only visible if the seat was all the way back. The laptop mount attached to the screws with wingnuts, so I could easily install and remove it. 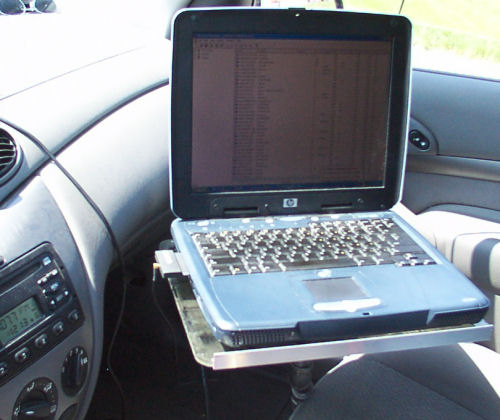 And that’s pretty much it. A person can still sit in the passenger seat if they’re not too fat and don’t mind being stabbed by the sharp edge of the metal piece along the front. (Someday I’ll round the corners on that piece.) I still use my homemade laptop mount whenever I take long trips where I’ll need my GPS. It’s also nice for when I make stops and need to check email or whatever. And before I got a Pocket PC, the kids and I used it for Geocaching all the time.

If you decide to drill holes into your floor, BE CAREFUL! There are things under the car that you don’t want to drill holes into. The gas line, for example. The holes I drilled were just a few inches from some important-looking tubes that ran into the engine. I had to measure carefully to avoid drilling into them.

Another semi-related project was my laptop DESK for the car. Before taking the kids on a cross country drive, I thought it’d be cool if they had a TV and their Playstation 2 in the car for the 3 day drive. So I removed the passenger seat and mounted a desk that I built into its place. Here’s a picture of it… 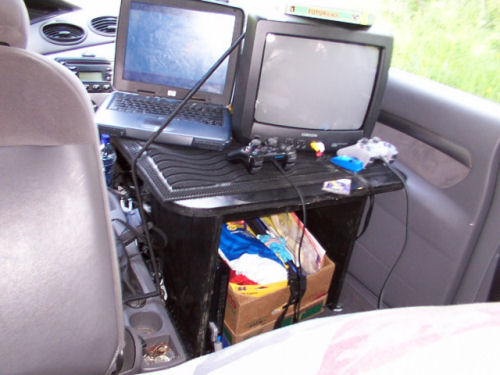 It wasn’t too hard to build. The toughest part was making sure the top part was level, which wasn’t too easy since the four corners were all at different heights. I painted the whole thing black and purchased a black rubber welcome mat and stuck it on the top to keep the TV and laptop from sliding around while I drove. I also used bungee cord to secure the TV in place. Along the bottom of the desk, there were brackets that fit over the mounting holes for the seat perfectly. Underneath was nothing but space, so the kids could store their PS2 and other junk.

The best thing was the strange stares I got from passing motorists and the comments from drive-thru people who almost always had something to say about it. It’s probably a good thing cops never noticed this. Since I could technically see the TV as I drove, it was probably illegal.