October 5, 2003 rbcp Leave a comment
Sunday, 10-5-2003, 11:30am: Last night I slept better than I have all year. I’ve always had this mild insomnia thing that keeps me up a lot all night. Last night I slept heavily for 7 hours straight. I got up at 6am, then went back to sleep for another 5 hours. I think I’m feeling like Peter Gibbons in Office Space after sleeping in until 3pm.

6:01pm: So here’s what I did today. Shortly after I wrote the paragraph above, I packed all my camera gear into a bag, got in the car and started driving. I didn’t have a plan, I just wanted to get out of the house. I end up about 30 miles away in Glen Carbon, IL at their Wal-Mart shopping center. I decide to try pulling the “Dash for Cash” prank that I’ve been wanting to do for awhile. So I find a great parking spot in front of Wal-Mart, directly across from a couple of pay phones. I climb into my back seat and get my camera set up on the tripod, pointed at the pay phones. My back windows are tinted pretty good so I’m sure that the victims won’t see me if they happen to look at my car.

The way this prank works is I call up the phone and when a person answers, I say something like, “This is Corey from Z107.7, are you ready to play the Dash for Cash?? …. Okay then, this is how it works. When I say GO, you have 45 seconds to make it to Petsmart where you’ll win $107.70 CASH!” The whole point is to make them run really fast from the pay phone. It would be much better if I had a 2nd camera guy inside Petsmart, filming them asking for money. But I don’t.

Anyway, it’s all going pretty good. I talk to a few people on the phone who just hang up on me. I’m there for maybe 20 minutes. Then a Glen Carbon policeman shows up. He knocks on my window and wants to know what I’m doing. “I’m uhh, just filming that pay phone over there…,” I tell him. “Why are you filming a pay phone?” I explain the prank to him and he asks for my driver’s license which I give to him. He walks back to his car while I put away my stuff and jump into the front seat. Now another cop shows up and asks me to get out of the car. This one is grouchy. I explain once again what I’m doing. He tells me that they’ve had several complaint calls against me which seems a little bizzare to me since I hadn’t even been successful at the prank yet. So we stand there for awhile as they lecture me.

“Where do you live?”

“Then why are you in Glen Carbon?”

“Because I had nothing better to do today.”

“Do you live alone?”

This really seems to shock him. “You’ve got 2 kids and you’re doing stuff like this??”

“I didn’t realize that filming a public phone was breaking any kind of laws.”

“Well it’s a little immature for somebody that has kids.”

I wasn’t being as sarcastic as that sounds. The 1st officer came back from running my drivers license and I heard the dispatcher saying something about petty larceny to him. They told me to leave and if they caught me doing it again they would arrest me for being a public nuisance. So I leave. When I first pulled into the parking space, there was this old lady sitting in the passenger seat of a van in a handicap spot. She saw me pull up, climb in my back seat and set up the camera on the tripod. So my guess is that she thought I was some kind of terrorist and called the cops on me after she left. Her window was down so she may have heard the phone ringing. Maybe she saw the movie Phone Booth and thought I was going to sniper whoever answered it.

Next I head for downtown Saint Louis to try the same prank. I find some pay phones along the river in front of the Arch and make sure they accept incoming calls. I pick a spot on a hillside under a tree and set up my camera again. This time it goes much better. I get 2 different people on tape running away from the phone and onto a riverboat called the Arch View Cafe, asking them for their money. There was a 3rd person I got but I screwed up the tape on that one by not hitting the record button. It was a slow day for tourism so I’m thinking I’ll return next Saturday to get more footage since the spot I found to record from is perfect. The spot I’m in allows me to film the people running up on the deck and wandering around, looking for someone to give them money.

During the time I was filming this time, I was approached by 2 girls and a guy who told me they were making a video to send in to some reality show called The Amazing Race. They wanted to film themselves walking up to me, introducing themselves and asking me why I thought they should be on the TV show. My reply was something like, “Because I’ve heard about you 2 and apparently you’re able to leap over tall buildings in a single bound!” So we filmed a few takes of that and they seemed pretty happy with it. They sat around with me for a few minutes hoping to see my pay phone prank happen but we couldn’t get anyone to answer so they got bored and left.

After I got the 2nd person to run to the Arch View Cafe, I walked over there to get a drink for myself and the concession people were laughing about the people coming up there and asking about the radio station contest. She commented to her co-worker that she would never be dumb enough to fall for a trick like that. I thought about telling her that I was responsible but decided against it in case she decided to be the 2nd person that day to call the cops on me. And I guess if these girls make it onto The Amazing Race, I might be on the show too, telling them how cool they are. Yay. 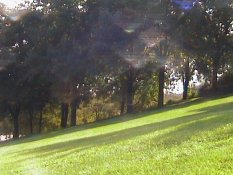 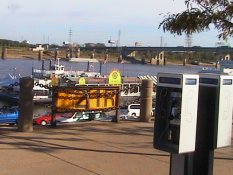 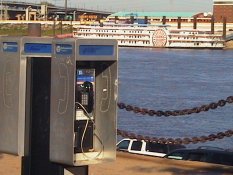