My friend Angela and I went to the Stand By Me Celebration in Brownsville, Oregon today. It was about a 30 minute drive from Albany. In the mid 80’s, the movie Stand By Me was filmed in Brownsville. I have no idea why since all of Stephen King’s stories usually take place in Maine. But it was. I’m not a huge fan of the movie and I don’t think I’ve ever read the Stephen King story that it was based off of. I saw the movie once or twice in the 80’s and that was it. But it seemed like it might be fun, so we went.

Brownsville was a nice little town. I think we enjoyed visiting all the shops and museums there more than the actual Stand By Me stuff. The town was packed with people and there was Stand By Me stuff everywhere. Everywhere you looked they were selling Stand By Me memorabilia. There was even Stand By Me water. 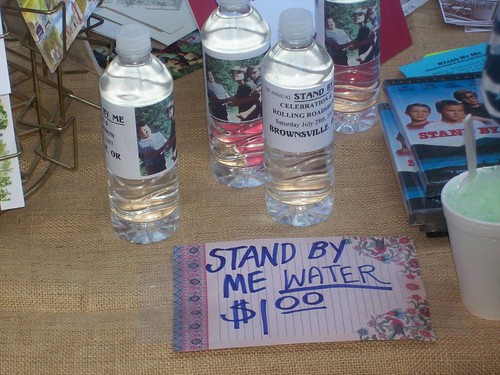 We wandered around for a few hours, reading all the things about the movie. Brownsville is really small and I’m sure that movie is the biggest thing that will ever happen there. It seems like even when they’re not having a Stand By Me festival, there’s a lot of Stand By Me stuff everywhere. It was fun to learn about the movie, even if neither of us could remember a whole lot about it. We had lunch inside a bar and grill that was in the movie. There were old cars all over the streets and 50’s music blaring. A few of the cars were the ones used in the movie.

At some point, I got the idea of telling people that we’d seen River Phoenix there, who was one of the 4 stars of the movie. He died in 1993. Then the plan evolved into me wearing a CAST badge and claiming to anyone that asked that I was River Phoenix. So we started looking around for paper to make a fake cast badge. There were other cast members at the event and quite a few that had badges that said EXTRA on them. In the pie eating scene, they used people from the town to be extras. We purchased a Brownsville, Oregon button that would hold my badge on and found some paper that I could draw a badge on. Then Angela suggested that I just go ask for a real badge.

The badges were in clear plastic and looked pretty nice and there was a booth for cast members and extras to get them for free. I could easily claim I was an extra and they wouldn’t know. I chickened out at first, but then went back and asked for a CAST badge. I was going to tell the old man there that I was River Phoenix if he asked, just to see what he’d say. And if he noticed that I wasn’t, I planned to tell him that I was an extra in the pie eating contest. If you’ve never seen the pie eating contest scene, you really should watch it:

Oddly enough, though, the old man didn’t ask who I was in the movie. He just believed that I was a cast member. He was friendly and chatty enough, but he didn’t ask me. I wasn’t expecting an actual Cast badge. This ruled! I said thank you, put it on and quickly walked away.

We didn’t stay for much longer after I received my badge, but I did manage to have a little fun with it. While inside an antique shop, the elderly lady working there noticed my Cast badge and asked who I was. I told her I was River Phoenix, one of the four boys in the movie. Her face lit up and she says, “Ohhh!” She actually seemed a little star struck. We said a few words to each other and I shook her hand, then we left. It’s hilarious to think that she might tell everyone that River Phoenix was in her shop. And that if she finds out that he’s dead, she might think I was a ghost or something.

We were on our way back to the car after that, but stopped to get sno cones. A group of teenage girls were working at the sno cone stand and the one making my sno cone asked who I was. I told her River Phoenix. She pauses, smiles, and says that I’m her hero! I’m being looked at by all these girls and one of them tells an older lady in the back that River Phoenix is buying a sno cone from them. I think I heard one of them mention that he was dead. I knew that my ruse was up then, so I blurt out something along the lines of, “JUST KIDDING!”

They all had a good laugh about it though. I told them that I was actually just an extra in the crowd and I don’t know why they gave me a Cast badge. The girl giving me my sno cone made a big deal about it, saying she wasn’t going to let me buy anything from her. Then she told me that she’d spit in my sno cone and a few other random things. All just kidding around, of course. Geez, I hope she was. I tipped a dollar and we left. Being a star for 20 minutes was fun. It’s probably good that we left before I ended up getting punched in the face.

Reading all the Stand By Me stuff on their website earlier this morning made me decide to download the movie and watch it, since I hadn’t seen it in 20 years. So we got back home and watched it. If we’d stayed there any longer, we could have watched it outdoors AND we could have watched them have a real pie eating contest. But that would mean hanging around there for another 5 or 6 hours, which was just a bit too much Brownsville, Oregon than I wanted.

It was cool to see the movie after visiting all the sites. We recognized every other thing in the movie. We didn’t realize that the interior of the bar was in the movie, so we were able to see about where we our table was. Actually I think the movie camera was in our table’s spot. The bar looked exactly the same in the movie as it did today. More or less. And we recognized cars and other parts of town. It was cool. I have a new appreciation for that movie. But I doubt I’ll ever watch it again.

Click here to view the pictures from today. They’re not the greatest pictures ever, but the Brownsville museum had the coolest collection of old lineman’s tools I’ve ever seen and I got a lot of pictures of those. Plus my cool CAST badge is in there.

Oh yeah, I forgot to mention – it was a little creepy how nice everyone in the town was. I mean, it’s nice that people are friendly. I’m just not used to it. Like we’re walking down the sidewalk and some guy with a couple of kids says, “Hi! Welcome to Brownsville!” And a few other people in museums have random conversations with us. I’m just way too anti-social for that kind of interaction. I just checked the population of Brownsville and it looks like it’s under 2,000. So they probably notice who all the out of towners are. For such a tiny population, though, they sure have a nice downtown area.