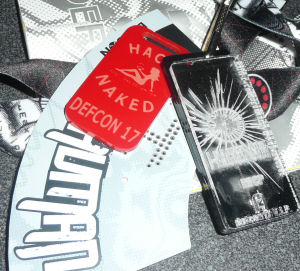 Once again, I flew to Las Vegas this year for Defcon. It went a little like this…

Thursday: Drove to the airport with plenty of time to spare. I expected to have my backpack searched extra because I had about 200 PLA CDs in it, all stacked neatly at the bottom in two rows. On an x-ray machine it probably looked like two cylinders. But he took me over to the bag searching area and open a different part of the bag and swabbed the inside with cotton, then put it in a machine. Either looking for drug or bomb residue, I guess. That’s when I remembered that I used that compartment of my backpack on July 4th to stuff all the trash from our fireworks. He didn’t tell me why he did that, but I wonder if they had something that picked up some gun powder residue. After that he dug in the regular part to see my stacks of CDs. Then let me go.

The plane ride was boring. The guy next to me kept drifting off to sleep and leaning on me. I kept elbowing him awake. Had a layover in San Francisco and that plane was delayed by an hour, but I didn’t mind since it gave me more time to charge up my dying iPhone. The girl next to me on the next plane kept bumping into me, she kicked me once, flipped her hair into my face another time. I ignored her a listened to a podcast the whole time.

I listened to the latest episode of 2600’s Off The Hook and was surprised to hear them play Rob T. Firefly’s latest hit song, called Bell Odyssey, at the end of it. Thirteen years ago I wrote this song in a PLA issue and he decided last week to actually record it, and it’s amazing. Go take a listen to it on robvincent.com or listen to it at the end of Off The Hook for July 29th, 2009.

I-Ball rented a car for the weekend so he was able to pick me up from the airport and take me to the hotel. We walked around for awhile and ended up in the room he was staying in, where there were stations set up all over the room for soldering electronic Ninja Party badges. Both of us soldered a couple of them. I checked my Twitter and noticed that Pinguino was at Defcon. A few minutes later, I noticed that Pinguino just happened to be in the same room as me. So I went over and said hi to her. We hadn’t seen each other in 8 or 9 years. I also finally met Strom Carlson.

Got a message from RijilV and T. that they were at Peppermill, so me, I-ball and RTF walked over there to have some dinner with them. Then we hung out in the Chillout room for awhile and met Labythan (an old school Cal’s Forums guy). That’s about all I can remember from Thursday.

Friday: Woke up early and hung out at the hotel’s food court for a large portion of the morning and afternoon, working. Bumped into Rogueclown and RTF for awhile. Then Paul and Larry from PaulDotCom, who gave me a Hack Naked party pass. Went to the Playboy Club with a bunch of i-hacked.com people. I think it was Adam (not completely sure) who sent two of the employees over to me to try and get me to dance and drink with them. Not sure what their angle was, I declined everything. I thought they were trying to lure me into a private room for an expensive dance or something. Apparently Surbo was snapping pictures of us. Beer was free and I drank a lot.

Later we went to a party at the Hard Rock Hotel, which was in a small room and way too full. I ended up sitting in the hall for awhile, resting and texting. Before we left, hevnsnt wanted to sit at the elevators on Floor 5, constantly hit the buttons and cheer for people when the doors opened. There were about 10 to 15 of us doing that for 30 minutes until a hotel guy came up and told us to stop.

Saturday: Hung out by the PaulDotCom table for probably an hour, chatting with them and random people who walked by. I met Rachel and Georgia from GRM n00bs and a girl named Drollee (I’m sure that’s spelled horribly wrong) who was a listener of The Phone Show and had called in and talked to me on the air a week or two before. Then for the next 2 days, I seemed to bump into her nonstop. The PaulDotCom guys were nice enough to let me put about 200 PLA CDs on their table to give away for free. 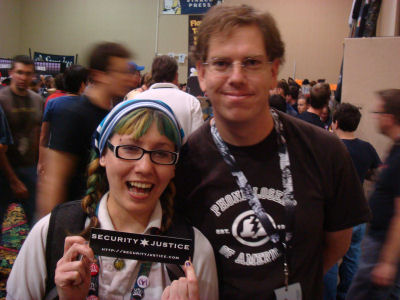 Me, Surbo and hevnsnt entered the social engineering contest and I ended up meeting notkevin at that. We expected them to give us an assignment or something, but we were just told to social engineer anything we wanted as long as we didn’t drop any docs. So we got the hotel’s housekeeping frequencies and listened to them dispatch things to rooms. Then we called those rooms to talk to the guests about whatever they needed and tried to make them as unhappy as possible. “You need an extra cot in your room? Sure, that’ll be $100 extra per night and I just charged it to your credit card.” One lady said she was coming down to the front desk to get me fired, so we went down there and stood next to her the whole time and listened.

I-hacked got honorable mention for our entry, which is their nice way of saying we’re huge losers. We got to play a couple of the calls for a crowd of people and it got some laughs. I couldn’t stick around for the closing ceremonies since I needed to catch my plane. But notkevin brought me and I-ball up to his room and gave us some really cool t-shirts. Thanks, notkevin!

There was the Podcaster’s Meetup where a huge panel of podcasters did a live show, which I wasn’t cool enough to be invited onto. I got to meet Stankdawg there, and a few other people whose names I can’t remember. One guy lives in Eugene, just 45 minutes from me, and we talked shit about tr0n for awhile. There were parties afterwards. I talked to Grey Frequency a lot and I finally introduced myself to Jason Scott. Bumped into yomama, thepublic, nekid amy.

Oh yeah, I twittered a lot throughout the weekend which occasionally caused people to show up and say hello. And during the podcaster’s meetup, altalp tried to send a phone up to the room and have me paged for a phone call, but the hotel staff wouldn’t cooperate. So instead she had them deliver a trash can to me. I didn’t notice it until after the meetup was over and the party started, but there was a big, gray trashcan sitting in the middle of the floor for the rest of the night. I explained to several people that it was my trashcan and one guy was nice enough to take a picture of me standing next to my trashcan. I didn’t take many pictures on my own camera and I’m counting on all these other people to send me pictures so hopefully that happens soon. If you have pictures you think I’ll like, my email address is bradcarter at notla.com. Maybe I can stick some pictures in this entry eventually. 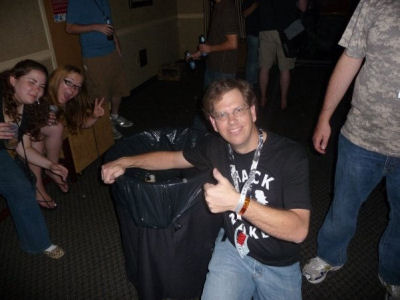 (thanks, Labythan, for this pic!)

Sunday: I met Shane! He’s a guy that I worked with in 1993 in Indiana and I lost touch with until just a few months ago when I noticed a video of him online from Shmoocon. I saw him briefly after the social engineering contest, then briefly in a hall somewhere, but on Sunday we actually got to hang out for awhile and do some catching up. I was able to impress him with my memory of everyone’s names from our old job, asking him if he still kept in touch with anyone. So that was really cool and I guess I’ll be seeing him at various cons from now on.

I refrained from blowing money on any t-shirts this year except for one that I had to have. It was at the EFF table and required a $40 donation. $40 for a t-shirt, but I did it anyway. It’s for a good cause. What really sucked was that they were out of that t-shirt by Sunday, so it has to be mailed to me. I went to lunch at Kadie’s with Stankdawg. I swapped CDs with dualcore. I actually bought his CDs. I told him that I didn’t own any CDs at all and I would just rip them and give them to friends, which he said he was fine with. Damn this physical media!

Went to Kadie’s again with I-Ball to have dinner, then we went to closing ceremonies. Had to leave early since I had a plane to catch. Stopped by the goon room to say goodbye to RijilV. Met notkevin and went to his room to claim our prizes of XXXL t-shirts. (That’s the only size they had left.) Went to the parking garage and I-ball couldn’t find his rental car. We walked down 4 stories looking for it before he finally spotted it. He got me to the airport about an hour before my flight, plenty of time to charge my iPhone so I could listen to podcasts for 2 hours.

I think this is a new feature, or maybe I’m just noticing it for the first time – when I’m listening to podcasts I can hit a “2x” button and it doubles the speed of the shows. Not the pitch at all, just the speed. So I was able to listen to 4 hours of podcasts during my 2 hours of flight. The people on those shows talk too slow anyway. As long as there’s not much music, it sounds fine.

So that was my Defcon. Pictures later. Or you can listen to an audio review of it by me, linear and Rogueclown by going to www.phonelosers.org/phoneshow/ and listening to the 8/3/2009 episode or clicking here.

One last thing…on the drive home after the airport, I was listening to the HipTrax podcast, which is a music podcast that the Geek Dads do. And I’m in love with this new song called Ode To Alderaan by Glenn Case. It’s a great tune and great lyrics. Listen to it.