Jammie visited last week, after not seeing her for more than 3 years. We went to a Local H concert, had dinner with her cousin, and she bought a Mac at the Apple store. Also went to Ground Kontrol arcade. This is all before we even left Portland. We were supposed to buy Macs together, but I found an awesome deal on Craigslist a couple months ago and couldn’t pass it up, so I already had mine.

We failed a Geocaching repeatedly, even on one Geocache that I’d found before. We swapped a few iPhone apps and I’m now addicted to a game called Angry Birds. As if Desktop Defender doesn’t eat up enough of my time. Thanks, Jammie. We visited Albany’s history museum, which is always good for a laugh. We also visited a furniture store across the street from the museum and this place was like a wax museum of celebrities. They had a Terminator and a Charlie Chaplin and a Hulk Hogan. Jammie asked what was up with them all, and we were told that the building was once used to make life-sized characters and a lot of them got left behind when they took over the building. Weird. But awesome.

We visited the carousel place and a couple antique shops. I ended up finding a good item to place in a Geocache as a PLA themed travel bug. We rode bikes and hiked through the woods, failing at another Geocache. Played minigolf. Jammie surprised me by telling me she hadn’t heard of the “Fuckin’ magnets, how do they work??” internet meme yet, so I showed her all the related material and got to watch her laugh hysterically at a months-old meme. 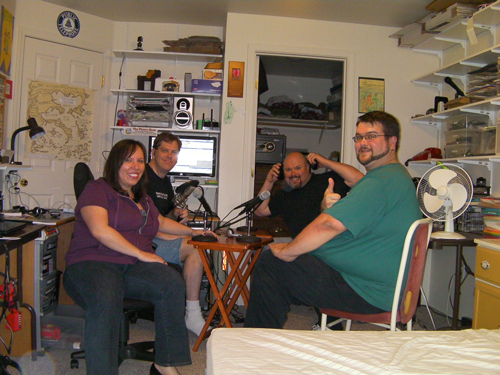 On Wednesday, we had breakfast at Rogers and I drove Jammie back to the airport, with a brief stop at Fry’s Electronics. The end.